Australians ready for a real conversation

Before discussing same sex marriage, we may well ask who’s actually having the discussion?

Australians are certainly a diverse people. We come from many ethnic backgrounds. We favour different sides of politics. We follow different football codes.

We have different interests and approaches to life. Our different belief systems might range from religious conservative to postmodern progressive, and everything in between and beyond.

Because of this diversity, we accept, not just tolerate, all people, including homosexual people. We live, work and laugh with all sorts.

We share a desire not to be concerned with other people’s private lives. Embedded in our culture are the ideas of ‘a fair go’ and ‘a helping hand’; that we are all ‘created equal’.

But Australians also don’t want to be spoken down to. We believe we should be able to have a respectful dialogue over a coffee, or a beer.

However, the establishment — including political, business and union leaders — just say that supporting same sex marriage is a ‘no-brainer’ on the basis of equality and equal rights, despite the same people holding the opposite view just two election cycles ago.

The change is described as “inevitable” but without in-depth discussion of the principle involved. Meanwhile, those members of the political establishment opposed to any change haven’t addressed the issue of equality.

What are ordinary Australians to make of all this? Polling shows that most Australians want a say on this issue and want to have a deeper discussion about it.

Luckily, as already mentioned, Australians have a general community disposition towards equality, the fundamental basis of democracy. So that fits in perfectly.

It’s what Australia has always claimed to stand for, and is the very reason why our country has been largely happy and prosperous. The democratic principle is our deeply shared ‘faith’; the highest common belief we all hold. Our public debates and discussion must be held up against this unifying standard.

But there are a few red herrings in the path of having this discussion.

One of them is that it’s a matter of ‘religion versus the rest’. But the principles of equality and democracy are available to all — conservative Christians, libertarian vegetarians, heavy metal lovers, backgammon enthusiasts, people of all stripes and colours, whoever. It doesn’t matter what group you’re in. 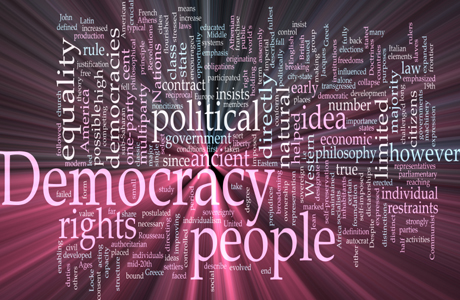 Another is that because same sex marriage is law overseas then it should be law in Australia. But we won’t be following America on gun laws, or Ireland on financial management, or Russia on press freedom. So we’ll just have to have our own discussion, thanks.

The next thing to do is to develop a question or statement that actually defines the issue.

It’s important to realise that the definition of marriage will be different depending on the polity in which you live. Given what we’ve already covered above, the democratic meaning of marriage is what we’re discussing. So, let’s put the question fully and properly:

As a free, democratic society based upon human equality, should we view the sexual union of a man and woman in a marriage relationship as a pre-eminent expression of human sexuality worthy of special recognition in our laws; or not?

For us, marriage is the exemplar of human equality; the equality of men and women. That’s because the voluntary, exclusive, lifelong relationship that involves the equality and union of both biological halves of humanity represents the democratic principle itself.  This means the definition of marriage in our law is as modern, and important, as all the other democratic concepts we enjoy, such as the right to vote for all.

You’ll find Real Equality raises these, and many other points not previously mentioned in 15 years of debate on marriage. We invite you to explore these ideas, think more deeply on the issue and begin a REAL conversation.

We need to discuss the issue of same sex marriage on the common ground we all share — equality, freedom and democracy.

The issue is actually:

“What should the definition of marriage be in a free, democratic society based upon human equality?”